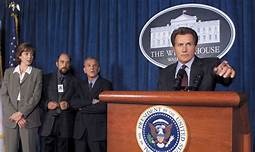 Why I’m Voting For Jed Bartlet for President

I never discuss politics on social media. In this political climate, no matter what your political affiliation the wrath of Satan will come at you from the other side. There is no civil discourse and I find it incredibly disheartening and tragic that we as Americans can’t simply have an opinion and not be sought out for pain and suffering for our beliefs.

However, this election I have decided to take a stand. I will be casting my vote for Josiah (Jed) Bartlet and I’m praying he once again picks Tim Matheson for his Veep. Any guy who could handle the guys in Animal House should be able to handle Congress. Well maybe.

Watching the West Wing reruns, which I do regularly, makes me long for the good old days when politicians hated one another, but were polite when they stuck the knives in someone’s back.

There have been times lately when I truly believe America will be totally fine in their battle against the coronavirus because the toxic atmosphere of politics today will take down the virus. No match.

People are so angry and aggressive we have become a nation of pitbulls and there seems to be no limit to the mean. Racism and anti- Semitism are fair game and hate has become an overt pastime that comes with no price to pay.

Friendships, family relationships and businesses have all felt the wrath of this new normal.

Jed Bartlet is the only man who can calm the waters and restore peace.

No one would dare call C.J. Craig fat at a White House press dinner.

Who could ever accuse Josh Lyman, Toby Zeigler or Sam Seaborn of inappropriate behavior? Leo McGarry was even coerced by Jed to hire a Republican, Ainsley Hayes in the White House.

Could you ever see that happening today?

Okay I know, you’re thinking Norma, hello, this wasn’t real life. The West Wing was a television program so you need to come back to reality. Politicians like Bartlet don’t really exist and never could.

I know I know, I’m very well aware of what politicians are, probably more than most since I’m a journalist and possess the anti-politician gene.

So here is my solution. Since Jed was created by genius Aaron Sorkin, perhaps he should run.

In West Wingland life was good, people were human and the politics were admirable. Crises were averted without name calling and shaming one another.

Since Sorkin imagined this political utopia let’s give him a shot at bringing it into the real world.

So Mr. S, I’m throwing your hat into the political ring whether or not you care to be there.

America needs you and it’s your duty to serve your country. To paraphrase a line from one of the episodes, “we’ve all been down that hole now and you know the way out.”

I’m volunteering to be your press secretary and Matheson for your vice president. Look out Congress the Belushi tamer is coming your way.

Sure I’m kidding, sort of, well maybe kinda, but the point is life imitates art or vice versa. In these times of anger, pure mean and contempt toward one another, perhaps this is the solution.

I for one can think of no other so I’ll throw my hands in the air and shout Bartlet’s campaign slogan, “Make America Nice Again.”

Stay healthy everyone and take heart, if you run out of toilet paper you can always use your ballot for the upcoming election.

Award-winning journalist Norma Zager combines her years of comedy with her journalistic skills, to create an offbeat hilarious take on modern life that touches the chocolate-coated soul of every woman. Zager returned to journalism after a 14-year stint as a stand up comic, playing Vegas regularly and opening for the biggest names in laughter. She created Norma’s 14 Karat Cookies after moving to Los Angeles and was the first comedian to have her own comedy/cooking show in Las Vegas. Her numerous television and radio appearances including Home and Family and appearances on the Food Network made her a favorite with audiences. Her cooking show on Beverly Hills Cable Network can also be seen on Youtube. In 1999, Zager returned to her journalistic roots when she accepted a reporter position at the Beverly Hills Courier newspaper and became editor after nationally scooping all other media and breaking the story about Laura Schlessinger’s mother’s death. When Erin Brockovich sued the city of Beverly Hills alleging an oil well on high school grounds was the cause of numerous cancers in former students, Zager’s coverage garnered national attention. In 2003 she was named Los Angeles Journalist of the Year and Best Investigative Reporter by the Los Angeles Press Club. The Wall Street Journal and The Columbia Journalism Review both featured articles about her work on the Brockovich story. Zager’s book about the Brockovich/Beverly Hills lawsuit entitled Erin Brockovich and the Beverly Hills Greenscam, is currently available on Amazon and bookstores everywhere. Lila Luminosity and the Lipstick Murders and Lila Luminosity and the Planet Christmas Murders combine her love of comedy, cooking and reporting to create a crazy, zany, fun-filled ride through the universe armed with chocolate, shoes and every woman’s perfect boyfriend. They are available on Amazon. Zager and her family reside in Los Angeles, where she is a journalist, radio show host, author, speaker and part-time journalism professor at California State University. View all posts by normazagercom